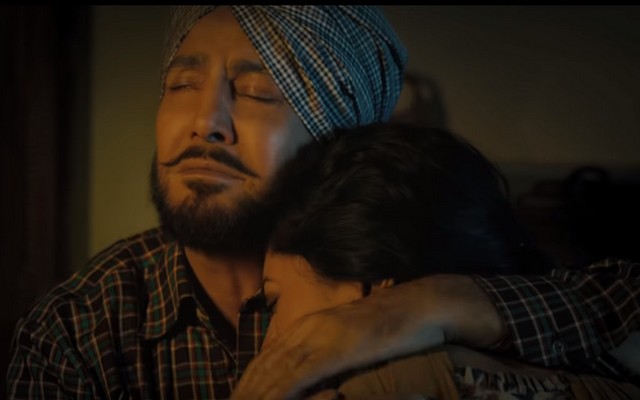 Storyline: Nankana is a story revolving around a family with a childless couple and their life when suddenly a baby comes to their life.

Review: First and foremost, as said everywhere about the film, Nankana is not about a father-son bond but a story that keeps pushing itself to different angles, just to make sense in the film. 'Nankana', the title of the film has probably been chosen to create a misconception that this one is a religious film, however once a person exits the theatre after watchingit, one question which a sane mind would ask will be - Yaar aah Nankana title kaahte rkheya si, could have been titled anything else but this..Nankana Sahib da naam use krn di lorh ta hai ni si ehni!

This film is about a man named Karma (Gurdas Maan), his wife Amrit (Kavita Kaushik) and their family. This couple happens to be married for long but have no child due to which Karma's father remains disturbed and keeps picking up petty arguments with his son. There's also a blind character in their family named Lalo (I guess that's what the name was) and a caretaker named Sakeena. The other family seen getting involved is their shareeks (chacha) where Tari (Anas Rashid) plays the chacha's son and is shown to be a rowdy and criminal minded person.

Karma happens to be a teacher who has strong opinions and it is because of his hard hitting point of views that his father keeps arguing with him. On the contrary, Amrit is a docile lady who keeps mum even though she is manyatimes insulted for being childless.

Set in the partition era of 1947, this film actually has a lot of factors to it. The first one is Karma's tryst with children at school where he imbibes good teachings into them and gives some true to life examples. Second one is a contradiction to Karma's character where he just doesn't say anything or even show his unhappiness when his 14 year old niece is married off at such a minor age. Rather he's seen singing shagna di mehndi wale geet!

Third is the introduction of his master Swaran Singh, which holds no relevance in the film. Fourth is hiding the facts from the family by Amrit that the shareeks are planning a dirty game against them.

The couple on their way back from somewhere find an injured man and a child. The man dies and Karma and Amrit keep the child with them, ultimately becoming his bapuji and bebe. After quite a few years, Nankana (the child) is found by his real mother who tries to smuggle him away by crook but gets caught. After the typical main ehdi maa aa and stuff the family lets Nankana go off with her saying ke hanji eh ehdi asli maa aa n blaaah.

The lady (Aditi Sharma) takes the child with her only to get him mistreated by her chilam smoking husband (Sumeet Sachdeva) and all others. After the child throws tantrums for a few days, she plans to take him back to Karma and his family, only to get murdered on her way back.

Now throughout all this, Tari is shown in bits and pieces doing irrelevant stuff like kabaddi, ldai, arguments, Musalmana nu maaro and stuff...I mean what thaaaa fish??? Saara time all these guys plan to do is ke Tari da ik nyana Amrit di jholi paado ultimately to make him the heir of the Karma family and even after Amrit hears all this twice, she just doesn't care to tell this to anyone at home!

In all this, there are also junooni and inquilabi speeches against gorey and some songs for entertainement.

The film, has a mumble jumble storyline which might baffle you towards the end ke yaar aa ki kri jane aa saarey...and ultimately after the film is over...aah bnai kyun gai si film, what was the intention behind making this??

Talking about the actors, it was a pleasure to watch Gurdas Maan on screen after long and he's done his bit pretty well, though his make up (especially eyebrows) were a little overdone and even there was a lot of technical touch up done to his face which was very evident.

Kavita Kaushik was so not her, rather she is not fit for a role like this. With such a bombastic package of talent, this actress needs to do roles that bring out the energy in her, certainly not this hanji naji smile and cry woman kind of stuff. Potential wasted!

Anas Rashid - Looks wise he was good in the character but his dialogue delivery needs to be tamed in terms of pace.

Aditi Sharma - Oh Girl! Why did you say yes to this character, there's so much more in you than this.

Sumeet Sachdeva - Completely trashed in this film that was his supposed debut in Punjabi cinema.

The film had a cringy first half because the shots were blurry, for once you might rub your eyes to focus but soon you'll realise that it's the film and not you that's lost focus. The camera handling in the song 'Shagna di mehndi' was sadly shaky and shivery, very noticeable at some points.

I could go on and on but all that I need to ask the makers is - Why name it Nankana when there's no relevance of Nankana Sahib in this film?? Atleast the subject should have had some valuable weightage to match up to the stature of such a holy place like Nankana Sahib.

Verdict: A complete waste of time and money with a feeling of 'Ki si yaar aah picture!'