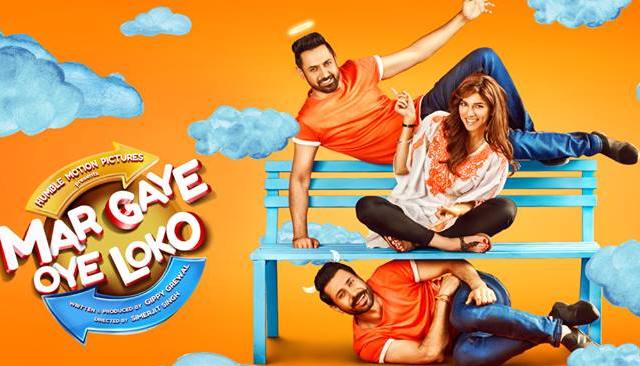 Storyline: Mar Gaye Oye Loko is rom-com based on the mistake done by a debutante Yamdoot, which creates much confusion for people on Earth as well as those who are dead.

The film opens on a dreamy note where Gippy Grewal (Tittu) is seen madly in love with a girl named Simran (Sapna) who studies in his college. With Guru's 'Aja Ni Aja' ruling majority of romantic scenes in the film, this love story takes a turn when Tittu proposes Simran but in return gets a 'let's just be friends' response. On being asked about her kind of man, she describes a version that truly defines the package that is introduced to the audiences in the very next scene and he takes our breathe away.

Binnu Dhillon's entry is so powerful that he made me hoot for him. He has never looked so 'Hot' before. His character 'Gill Bai' brings out an extreme level of swag, which probably, many makers never even saw in him. Wow is the word.

His mafiapanti introduces the audience to his rival, played by Jaggi Singh, who turns out to be the one who shoots him to death. It is then when mistakenly Tittu gets picked up by the death god instead of Gill Bai. Tittu gets introduced to life after death and that's when the film becomes a little weary.

The characters there in the world of the dead seem to be thrown in for deliberate comedy but sadly, none of them provoke laughter. That sequence is the weakest part of the film.

The events happening on ground are still interesting. Gill's transition from one character to the other is funny and the romantic strings between Tittu's soul and Simran are warm.

The film ends on a positive note but leaves you wondering, 'Who should be blamed for the lapse?' The makers have tried to introduce fresh element of afterlife in the genre that they've attempted but somehow either its the VFX or the art direction that hasn't lived up to the expected results.

Gippy Grewal has used himself in the film in a comparatively shadowed manner. He has done his bit well and  fits his character subtly. Though he doesn't look like a college student but thankfully not much of his college life is showcased in the film. His chemistry with Binnu is amazing and the duo induce giggles.

Binnu Dhillon has nailed it! This man has emerged as one strong actor, who will give very tough competition to the emerging lead faces in the coming days. This film has brought forward an all together different avatar of Binnu, something that the audiences have not seen before. He was so good as Gill Bai that you just cannot think of anyone else in his position.

Sapna Pabbi was decent as Simran and did her bit very well. She had the right expressions and her smile is sure to win many hearts. We do look forward to seeing her in more Punjabi films.

Karamjit Anmol had a great character and did his bit aptly. We did expect more from his character but his role seemed limited to a set profile.

Jaswinder Bhalla looked nice as the head of the dead world but his role could have been made more meatier. All that we see him doing in the film is aishprasti with his taglines 'Je hune vi na kita raaj, ta asi tattu de dharamraj' and 'khaaj te raj aap kre te hee swaad aunda hai'.

Jaggi Singh's entry was very strong and he looked handsome as the antagonist in the film but soon his character became a laughing stock and we coulnd't find much of him in the second half.

Mar Gaye Oye Loko gives us a fictional image of the world after death and also leaves us with a non preachy message that you shall you reap what you sow, and you eventually have to face the consequences of your actions.

Overall: This one is a light hearted entertainer which even has elements for your kids to get entertained.