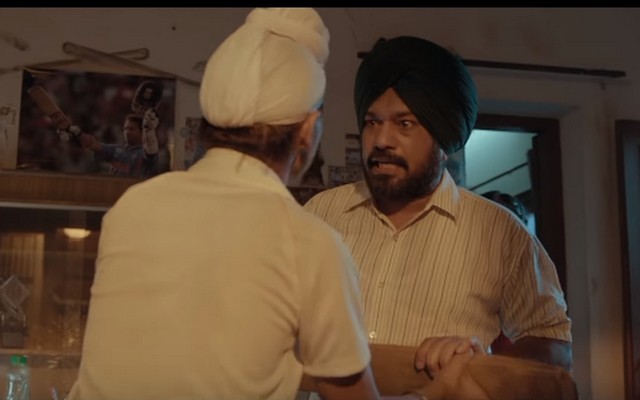 Storyline: Son of Manjeet Singh  (Gurpreet Ghuggi) is the story of a middle class man who is trying to raise his family with the little that he can  afford. The father of a scholarly girl Simran (Tania) and a sports loving boy Jaivi (Damanpreet), Manjeet Singh himself has seen failure too closely and wants his son to leave sports and get serious academically. Lack of funds, constant nagging by teachers and issues with life lead to circumstances that change a lot for this family.

Review: The movie starts off at a pleasant pace and one gets introduced to a lower middle class family that consists of a father and his two children Simran and Jaivi. Motherless, these children love their father a lot and never go against his will. While Simran is a studious child, Jaivi is a hardcore cricket freak, who has an excellent hold over his game. But his grades are a reason of discontent for his father, teachers, principal and others. This leads to nagging by all related to him and his father succumbs to the pressure and one day, breaks Jaivi's bat to pieces. Suddenly tragedy strikes and things change for the entire family.

Son of Manjeet Singh happens to be one of those few films that touched the sensitive chords of my life. It took me back in time and when the world saw Manjeet Singh and his son arguing onscreen, I was visualising myself there and re-living each moment that I had gone through, when I was Jaivi's age. There is no doubt about the fact that some might feel this film as over exaggerated or stretched but for me what worked was the truth behind the emotions that this story portrayed onscreen.

Many a times , Punjabi film lovers complain that makers only make comedy films here but this film will definitely change this perception. This film is not just relatatble but has also been executed pretty well.

The soundtracks are hummable and the background music is nicely done.

Actors Gurpreet Ghuggi and Damanpreet have complemented each other as father and son, and Tania fits well into Simran's subtle character. The story has been written with an intention to strike the emotional chord but one character that was weak was that of Japji Khaira. She could have done it better.

First time Director Vikram Grover did miss out at some points but overall his direction was decent. BN Sharma was a pleasant dash of comedy and Karamjit Anmol was not his usual comic self.

Verdict: Son Of Manjeet Singh is a watchable film for every parent and teacher and I assure you that after watching it, you'll be a changed person.