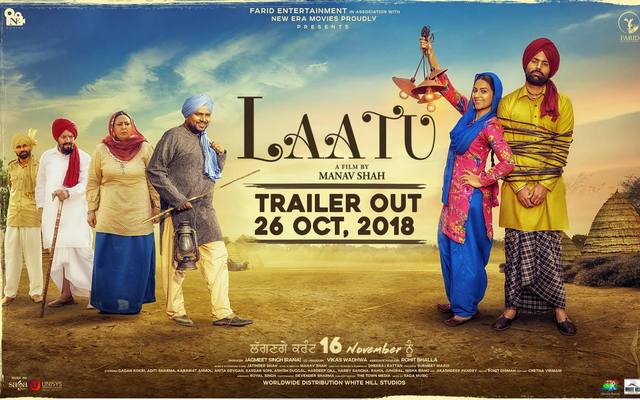 Storyline: Laatu is the story of the era when electricity supply to Punjab's rural areas was still under development, that too on a snail's pace. One could rarely see a house with electricity supply and those who could get the facility, treated it as a luxury and flaunted it as a symbol of high social status. This film revolves around 2 such families, the one with the bulb and the other one which doesn't have it but needs to get it done so as the son of that family gets married to the daughter of the 'laatuwalas', just because he fell in love with her, after seeing her at a wedding. How he finally woo her and her family is what this film is about.

Review: Some films show their quality right from the beginning and this one clearly said that I've not been taken seriously. Why I am saying that is because the character played by Karamjit Anmol is shown aged when the film starts and his mustache screams out loud that 'I am fake'.

The entire movie is basically a flashback story addressed to people in Karamjit Anmol's saloon, where we even see Director Manav Shah's presence in a few frames. Karamjit Anmol's friend, played by Gagan Kokri (debutante actor), falls in love with a girl (Aditi Sharma) whom he sees at a wedding. The man does nothing for a living and is the son of a man who is super proud of his mustache, so much so that he even competes in a mustache challenge. He loses to a man of another village, who happens to be the father of the girl whom Gagan Kokri's character loves.

Obviously, muchh di ldai pichhe ta besti krake, how would you even think they can patch up for their kids?

So the story moves forward and we're introduced to a XEN of the electricity department, played by Rahul Jungral, who also likes Aditi's character and makes sure that he gives constant ego massages to her father, including the installation of a bulb at their kaccha house, which makes them the only one having this facility.

So, amidst all this, there are characters woven in to justify friendships, relationships, and even chunniyan rangan wale bhai, to show how deeply the man understands her beloved's color choice...blaaaaaaaaaaaaaaah whatever!

For me, the story really did not stand out. I mean who really wants to see that a bulb was the challenge for getting people married in that era..I mean DUH!

The story was boring and not at all entertaining. I was forced to check my phone repeatedly and look around how the lovebirds are all giggly wiggly in a theatre that was only having a few more lovey-dovey couples, besides us, just cs that's what they need right - a khaali theatre.

The end comes abruptly and you keep wondering what the...

Anyways..let's talk about the actors

Gagan Kokri: Debutante actor Gagan Kokri seems to have been a misfit for this period film. I strongly recommend that he picks up roles of the modern age era ONLY because he has the innocence to carry off a character that projects honesty and values. He does need to work upon his dialogue delivery and emotions while skinning a character but because this is his first film, let's just hope he does better in the coming days.

Aditi Sharma: A great actor, Aditi looked the same as Angrej and Subedar Joginder Singh. She has not been any different in any of her previous films therefore, she doesn't really stand out in this one. Though I think that her dubbing sounded great.

Karamjit Anmol: The man did offer relief at some points in the film with his sudden punches but he too, could not save this one.

Anita Devgn: Not really the bebe we all love, in this film. The only scene that made me laugh was the one when she was arguing with her mother in law at night while listening to her son's stories.

Sardar Sohi: He portrayed the man who loves his mustache and holds his head high because of it but he couldn't really to justice to his character. I think Yograj Singh could have been a better choice.

Ashish Duggal: Bang on! He nailed it with his superb expressions and just the right emotions.

Hardeep Gill: Good in the little bit that he was given.

Harby Sangha: As a lineman, he was convincing.

Rahul Jungral: His performance stood out for me. This man had an edge over all the others, especially when he walked with his hands in his pockets, holding his head high with the pride of his position. Superb!

Nisha Bano: Pretty but nothing more worth mentioning

Prince Kanwaljit Singh: Fits his character well and did his bit nicely.

Music - The tracks were groovy and did make us tap our feet but the last one that started once the movie finished, was a disappointing change as the girl who suddenly comes on screen is in complete contrast to what the eyes had been seeing since the last few hours.

Verdict: If you've watched Angrej then this one will be a heavy dissapointment because the Director has tried to ape many things from that film. You'd end up rolling your eyes, trying to test your vision by focussing on things in the dark and also sipping your soft drink with full force just to see if someone can hear the slurrrrrping noise!