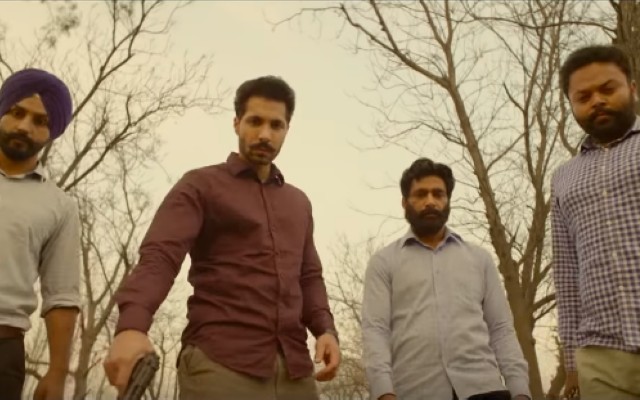 Storyline: Rang Punjab is the story of a man (cop) who starts a journey to bring down a criminal on his knees, firstly because he is a hardcore crime doer and secondly because of an accident which made him lose a loved one.

Review: From the very first scene of the movie, one can realize that this is not made with an everyday kind of mentality but a serious cinematic approach. With each frame, each shot, the technicality of the team behind it gets proven. The antagonist played by Kartar Cheema kills a couple right in the heart of a busy shopping complex, where accidentally the bullet hits another girl sitting behind the couple, and she loses her life for no reason. Why this girl was important, that is told later in the film but in quite an interesting way.

Deep Sidhu, who plays the cop, is a freshly joined SP who is given the liberty to choose his choice of officers as his teammates, from the options presented to him by his senior played by Hobby Dhaliwal. He chooses 4 of the officers, the background of each is side by side shown to the audience for a better understanding of their individual personalities. Sadly, not much of their background gets relevance in the later part of the film. the 4 officers include characters played by Baninderjit Bunny (corrupt officer), Gurjit Singh (headstrong officer), Dheeraj Kumar (separated and depressed officer), and Karan Battan (flirtatious officer). All these men are elder to Deep's character, therefore, the onscreen portrayal of Deep's cop self as a calm toned and unaggressive senior is a compliment for the actor. Though his dialogues could have been meatier and his warnings more in-depth, but as a Punjab based lover turned rebel, leading a criminal operation with a gang of men who are elder to him, Deep's act does leave a mark. This man has an innocence on his face and a smile that instantly reminds you of a next door Punjabi neighbor, who has freshly been recruited. His character gives you a deja vu of Salman Khan's Dabbang self, a calm headed officer who need not raise his voice to make an impact.

Baninderjit Bunny, Dheeraj Kumar, Gurjit Singh, and Karan Battan, all four have done their bits pretty well. While Baninder has grey shades in his character, Dheeraj and Gurjit are shown as emotionally sensitive characters. Karan, on the other hand, is given a Casanova image throughout, even when his role ends.

As an antagonist, Kartar Cheema impresses. He has come a long way in terms of his acting skills and I must compliment him for this. His expressions in the first few scenes itself raise expectations from his character which he manages to live up to. Even his dance moves were fun to watch. I admit that he has a better standing in his career as a negative hero than a positive one.

Jagjeet Sandhu, in this film, does what he is best at. The little bit that is given to him is performed well and convincingly. I do wish that he was given more to do.

Jagjit Singh is one person whom you definitely cannot miss from drooling over. His onscreen personality is strong and overshadows many others. He does have the look to play some mainstream roles, in this one though, he is the strategist.

Hobby Dhaliwal plays the senior to Deep Sidhu who has a soft corner for this officer and supports him in his mission. He does his bit credibly.

Reena Rai is paired opposite Deep Sidhu. The girl has surely passed the acting test but her dialogue delivery was a point of concern. Being an overseas kid, her accent leaks through her dialect, which disconnects the viewer from her character. The character could have been shown to have flown in from a foreign land which could have justified the accent. In future, a dubbing artist must be considered for this actress.

The soundtracks were a mix of peppy and romantic numbers and I personally loved the romantic song.

Directed Rakesh Mehta manages to carve a niche for himself. His technicality speaks out loud through each shot and frame of the film. His direction reminded me of Anurag Kashyap's projects which are more often for people with serious content thirst than the ones who are at the theatre for some breezy fun.

Verdict: Rang Punjab is a content-rich cinematic experience especially for people who are tired of watching Punjabi weddings in every release. These are films that can pave way for today's Punjabi industry to grab National Awards.