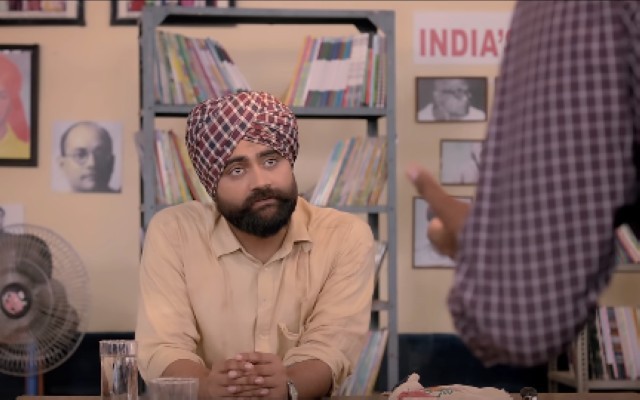 Synopsis: Do Dooni Panj is a unique take on Punjab's unemployed youth and their miseries. The protagonist of the film plans to file a legal suit against the educational institutes from imparting misguided motivation to him for all these years and demands his tuition fee back with interest. How he fights his legal battle and what all happens during the trial is what this film holds for its audience.

Review: Do Dooni Panj is one of those many Punjabi movies that suffer due to their badly cut trailer. After watching the trailer of this film, we had zero hopes from it but while watching it, we were surprisingly entertained.

The film revolves around Amrit Maan's character Jagga, who is a rural Punjabi boy of a very poor family. A Ph.D. degree holder, Jagga is still jobless and is looked down upon by his family members as a useless element. He is in love with a girl (played by Isha Rikhi) whom he calls Gugu, but she also is unable to cope up with her relationship with him due to his bad financial condition. One fine day, after his regular set of drinks, Jagga and his friend (Karamjit Anmol) sit down for a discussion when he gets the idea of demanding his institutional fee back for the reason that his degrees couldn't fetch him a job. From University to College and then to his school, he goes everywhere and ultimately files a case against the school authorities for imparting wrong education to him and motivating him for a better future beside knowing the fact that he isn't that capable. What follows is a courtroom drama where his advocate (Navdeep Kaler), a first timer, goes ahead and presents the complaint in the court of an irritable judge (Rana Ranbir) who declines this case earlier but later, accepts the case for legal arguments.

The second half of the film is entirely a courtroom drama where the judge offers the teachers to prove that Jaggi has always been an intelligent student and Jagg has to prove that he's been a bad grader all his life but was imparted education by his teachers only for the sake of a fee.

In this feud, the teachers try their best to save themselves from returning the fee and ultimately we see Jaggi as a pakode wala, eyeing the future MLA's seat.

Storyline: Going by what we saw onscreen today, Do Dooni Panj certainly had something unique to offer. The storyline was relatable, and one does see a lot of educated youth of Punjab being wasted in unsuitable jobs. The unemployed angle does remind you of those degree holders who have education to flaunt but no money to survive. The courtroom angle shows the level of manipulation that some greedy teachers indulge in, just to get those few bucks and if in trouble, to save themselves from paying back, literally. The film also touches upon farmer suicides and quota system.

Direction: Harry Bhatti's direction has been appreciated for his last 2 films and this time too, the director holds a vision which does get across in the right way but the man has surely taken too many cinematic liberties. His courtroom satire is dragged and at times too much to handle. Though the man does seem to be inspired by Bollywood's courtroom dramas, the screenplay definitely goes for a toss at many places leaving the viewer in confusion and at some points totally uninterested. It starts to appear like a mix of many films. If only the screenplay would have been written in a better way and the direction could have been crisper, this film could have done wonders.

Actors: Amrit Maan looks very good with a turban and his acting has definitely improved. Bonus points for his comic timing and expressive eyes. Amrit is one actor who needs a Director who can see his potential, which he hasn't found till now. Let us hope that some one really understands Amrit's acting genius and uses it in a way that boosts this singer turned actor's career as the lead face of Punjabi films. His Bhagat Singh looks and Diljit's backing vocals are icing on the cake. By the way you can't show your hand to the judge no matter what, it is disrespectful.

Isha Rikhi - Did not fit in well.

Navdeep Kaler - Impressive performance and superb dialogue delivery. His character as the advocate was well thought of and the improvisation was also impactful.

Sardar Sohi, Rupinder Rupi, Malkeet Rauni, Nirmal Rishi, Nisha Bano and all the others had fairly less to do, and the much that they were given was up to their caliber.

Preeti Sawhney's character stood apart as the Hindi teacher and for once we did not see her cleavage peeking through from her saree blouses, as the earlier faculty roles that she's done in Punjabi films.

Rana Ranbir's character was satisfyingly apt. It was a pleasure to watch him act maturely and not do the typical dumb boy comedy. His potential has not been appropriately used but the chunk that he had was pleasing. Though suddenly such an irritable judge becomes so patient and free to spend 2 entire days in a case like this that too wearing a so-called Hawaiian outfit was a little weird.

Karamjit Anmol's comic timing cannot be matched and his character was an important part of the film. He cooked it up well.

Music - The songs of this film are a mix of dance numbers, romantic and sad ones. A decent set of songs

Verdict: Do Dooni Panj is a dragged but conceptually unique movie that entertains and leaves you with nothing much to carry home as baggage.