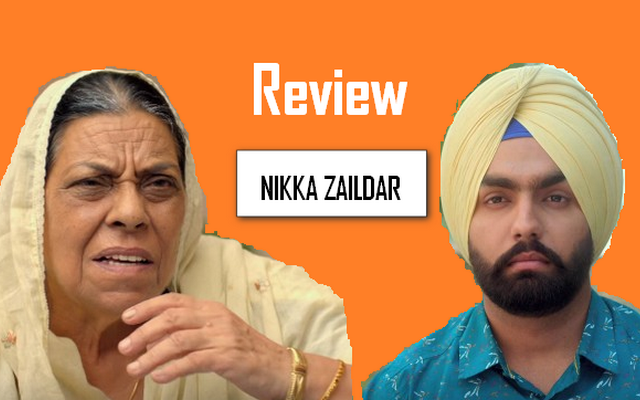 Hey Wait! Before You Book Your Nikka Zaildar Tickets, Read This Review

Nikka Zaildar has hit worldwide cinemas but the theatres are mostly half empty. Is this movie one of those which picks up with time??

Ammy Virk and Sonam Bajwa starrer Nikka Zaildar is the story of a college going guy who falls in love with a first year college student. In his struggle for their alliance, things get messed up and Ammy (Nikka) gets himself into an unwanted relationship. What happens next is something that the movie goers should go and watch themselves.
But should you actually rush to the theatre for this movie??

Well, I don't really think there is a need of anyone to rush! The occupancy is pretty low so the tickets are easily available.

How about the starcast?? How have they performed??

This movie could disappoint many Ammy Virk fans! As the leading lady (by the way was Sonam even the lead actress in Nikka Zaildar?) Sonam was disappointing. Actually, the way her dialogues are and probably the character's overall weakness made Manraaj (Sonam's onscreen name) an aeven jeha character.  At times when Ms. Bajwa uttered her dialogues, I heard people saying 'aa ehna aoona jaoona kyon krdi aa sidha ni bol hunda'! They meant that Punjabi can be spoken in an easy way, one doesn't really need to add the extra 'U' to the dialect. (eg: Main college parhan aoundi aa..could have been main college parhan aandi (aundi) aa'...you know saral vartalaap). Also its Combine tractor not campain!

How was their onscreen chemistry??

Not at all Ghaint! This couple was a complete misfit. We appreciate the casting team's effort of trying something new but frankly the duo literally didn't dhuko with each other. Sonam was looking much elder to Ammy. Not to forget Ammy's look and over trimmed beard reminded me of his struggling days.

Who else was there in the film?

Actors like Nirmal Rishi, Karamjit Anmol, Sonia Kour, Gurmeet Saajan, Kishore Sharma, Parminder Barnala and Nisha Bano were also seen sharing the screen space but out of them all Nirmal Rishi deserves a standing ovation for her energy and class-apart dialogue delivery in the movie. This lady has time and again proved that actors such as her can carry the entire burden of a weak film on their shoulders and still ensure that the audiences get their share of giggles and entertainment throughout the film.
Also, Karamjit Anmol's character as Bhola was also impressive. His transformation from a college senior to a vichola got with it a dose of much needed situational comedy at places, which kept the audiences amused.

How about the direction and storyline?

Simerjit Singh has previously directed Angrez that had worked pretty well for Ammy Virk but with Nikka Zaildar, Simerjit's directorial excellence has literally crumpled for us. There seemed to be nothing extra ordinary in the way this entire film was shot and the lead pair, from the direction point of view, could have been treated better than this.

The story of this film is average. The climax interests one but ultimately the snail paced screenplay makes the entire experience stretchy and unbearable. The second half is somehow predictable and the end is something that seems to have forcibly penned so as to make this one a message giver for the society...jama ee zabardasti jaapi o ta!

The film has an unwanted appearance of a Punjabi singer jo pta ee nahi kyon paya gya cs it was evident throughout the film that the bride was interested in someone else. (thodi pehla story reveal kr deni chahidi si ehnadi vi)

Verdict: I saw people walking out of the theatre in the second half. Nikka Zaildar couldn't really justify it's title and also didn't impress me due to severe lack of content in the movie. If this story would have been released in the 90s then it might have been received better than today. Oh ya! the songs were good!