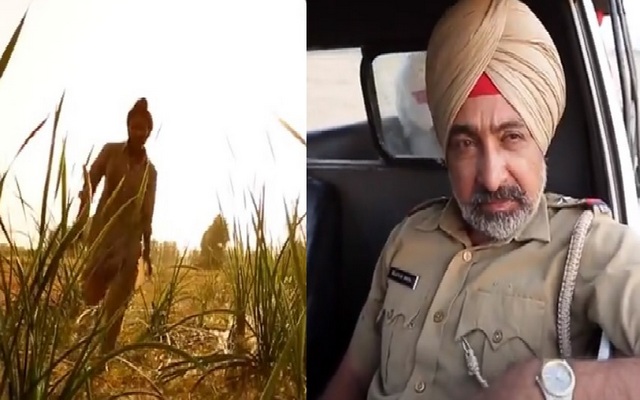 This short film by Navtej Sandhu yet again throws light upon the dark era of Punjab , the period of 1984 and forthcoming years. The title means the lost turban.

The young actor Japtej plays Manga Singh, an innocent young boy whose brother is Pargat Singh. Pargat Singh is a Kharku and ia wanted by the police. In order to capture Pargat, the police arrests Manga and that's where the film starts.

Japtej has already been applauded for his performance in Farhan Akhtar starrer Bhaag Milkha Bhaag and in this movie plays an impressive part. On the other hand, Ashish Duggal who plays the role of Inspector Dilawar Singh is also one of the high points of the movie.
But the subject is something we have seen over and over again.

To present something like this it has to be expressive enough to move the audience. While watching the movie I was neither moved nor my eyes were watery. The story could have been handled a little more aptly which could have left an impact on me but alas!

There is this a scene where the Kharku ( Pargat) stands infront of the policeman’s bike and starts hitting him, the scene was a little too made up and the reality of this in practicality is questionable. I somehow felt that there should have been some opposition shown by the policeman and rather than him being the only one being hit, there should have been an equal scuffle to make it look more real.

Talking about the dialogues which are written by Navtej Sandhu, I must compliment him that he's penned them down well and the lead actors have delivered them pretty effectively.

One of the most powerful dialogues of the movie was “Punjab naal waffa pal lo , Dhakka na karo". But sadly there is this thread of conversations between Dilawar and his SP boss, which is just not impressive. The boss speaks Hindi and Dilawar talks in a mix of Hindi and Punjabi while replying.
Background score and screenplay is average.

Overall the subject chosen is very sensitive and something close to everyone who stays in Punjab. Pride of the turban is a feeling with which every Sikh will relate, but the treatment of the movie could have been much better which could t the emotional chords of the audiences.

Navtej Sandhu has given us some masterpieces in the years gone by but this one doesn't qualify to that level. Though we appreciate the fact that a fair effort has been made by the entire team towards delivering the best product but as we all know, not every project is a masterpiece haina!

Wishing the team all the best for their film's worldwide screenings.