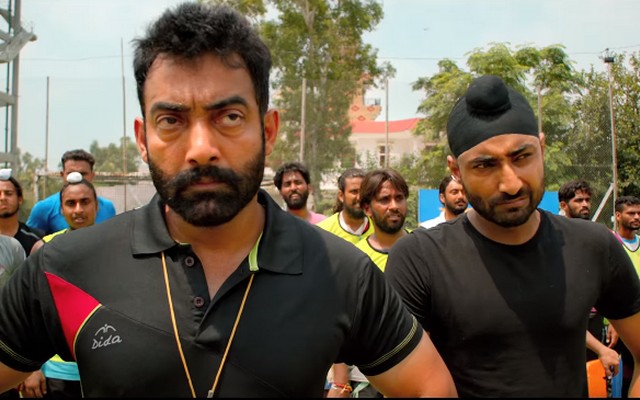 Storyline: The story of Khido Khundi is fairly simple. Harry is the talented player of Sansarpur’s hockey team. By a stroke of bad luck, he falls prey to a planned move by his jealous coach causing him to lose out on the game forever. Strong rumors circulate – did he consume steroids before the match? Unable to defend himself against a public character assassination, Harry loses it all – the faith of his people, his game, and most sorrowfully, his father.

What Harry does not lose is his game that runs in his veins. He tries hard to live a simple life but Hockey keeps him going back in time. When he sees his younger brother getting inclined towards this game, he warns him of the consequences and asks him to stay away, but he’s not too successful and ultimately surrenders to his brother’s wish, after he sees him playing. It is Fateh’s love interest Naaz that urges him to play the game.

The English players, threatened by Fateh’s performance, plan to take the rough route and purposely cause him brutal injuries. Fateh’s sister in law Lalli fights a case against this injustice but loses it because of the widespread racism in the court of law.

Thereafter, Harry challenges the coach for a match against his team at his homeground in India. There on begins his journey towards vindication. And, like all such journeys, it is not one without obstacles.

The hockey team is, predictably, a disaster. None of the players are professionals and lack forte, team spirit and unity, and the grit and determination that is essential in a race for a win. How Hary and Fateh get them to become pros and attain respect in the eyes of those who had lost  hope of reviving the lost glory of Hockey in it's own birth place, is for audiences to see in the theatres.

Review: If you expect that Khido Khundi is only for Hockey lovers then you're mistaken. This film has all the ingredients of an entertainer. It's got romance, brotherhood, relationships, family drama, songs and off course the GAME. I must confess that from the trailer, I had least expectations from the film but after seeing it, I was impressed, especially the first half. It was purely an 'oe movie vdhiya aa' feel for me, atleast till the interval. Manav Vij and Ranjit Bawa's brotherly tie was way too warm and they both carried it equally well. Their hit, shout and cuddle quotient brought a smile on my face.

But, Manav does sweep cleanly above the others, with his yesteryear look. Oh god! Remarkable is the word for that particular sequence in the film. His emotions, his game and his subtle romance, strikes a cord and you fall for him.

Then comes the second half. Post interval, at times, the screenplay seems to stumble over some unfixed bits and falls weak, picks up pace again and then moves into another weak zone. So, that might trouble a few, who are already of an opinion that they're in for a Chak De kinda experience.

Mandy Takhar has played an aggresive, hard hitting woman in the film and she's done it well. Debutante Elnaaz Norouzi, though has a relatively shorter appearance in the film, but she surely has done her part much better than many so-called experienced actresses of Punjab. She, from what it seems, can pull off good roles in Punjabi films.

Lastly, Fateh - Ranjit Bawa, a sweet character with a youthful charm, who is stubborn over his choices. His part is carried off beautifully by him and the naughtiness is the frosting on the cake. One can actually see him playing Hockey and not just enacting it. Yet again, loud and clear - Ranjit Bawa is a good actor, all he needs is a role that he can pull off, just like this one.

Negatives: The film has a weak screenplay in the second half. From a challenge to fellow set of players, suddenly the game feels like a world championship with flag hoisting and national anthem. Everything becomes too grand and one feels as if the makers are purposely trying to evoke a sense of patriotism and nationalism in the viewer.

Music: Khido Khundi has a well sung title track and our favourite from the film is 'Dillagi'.

Direction: Rohit Jugraj's direction is unconventional. He has brought out the best in the actors and has even used the locations pretty well. Comparing his previous commercial projects to Khido Khundi will be a mistake because this one is much ahead of all those. We'll be looking in his direction for more such ventures.

Verdict: Khido Khundi is a film made with an honest intention of reviving the lost glory of Hockey, the game which started from a small village in Punjab. The film does strike a chord, go watch it.