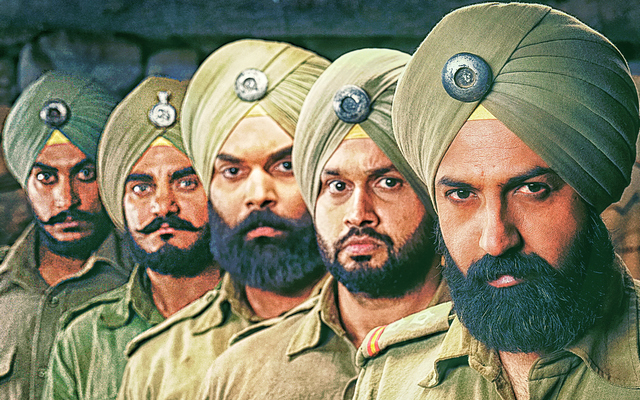 Storyline: This movie is based upon the life, struggle and valor of a Subedar in Indian Army who achieved his martyrdom while fighting Chinese in Indo-China war of 1962. This movie is believed to depict Subedar's professional and personal life and how he handled while serving his nation.

Review: It was an attempt and it has left everyone speechless. With trembling fingers and wet eyes, we saw people walking out of the theatre showing thumbs up to each other and  feeling proud of the fact that they've just watched a Punjabi film and that too such large scale cinematic presentation.

Subedar Joginder Singh, the film, is about the life of a brave army officer who fought till his last breathe to save his motherland from the clutches of the Chinese army. During the course of the film, Gippy Grewal, who plays the role of Subedar Joginder Singh, is shown in various age phases. Starting from the young Gippy to him after 16 years, the transformation is ecstatic. It is very rare to see a Punjabi actor this committed to his/ her role, to totally become someone else. There's no effort here "to tell a story", to create an impression or to whip up a dramatic storm to captivate audiences. The synergy in the storytelling seems subliminal.

Gippy's platoon comprises of 21 others out of which those who stood out were Kulwinder Billa, Rajvir Jawanda and Jaggi Singh. Though Jaggi has been seen in other films as well, and for Kulwinder and Rajvir this is a first time, but these three men have suddenly raised their bars up and I am hopeful that I will see much more of them in the coming days.

Karamjit Anmol has yet again proved that experienced actors are the backbone of every successful film. Karamjit's subtle humour makes the film light hearted yet doesn't muddle the sensitivitly of it's subject. Gugu Gill and Harish Verma have played their parts very well. Here, I would also like to mention debutante Sharan Maan, who leaves an impact with his character Bhaag Singh and dies an honorary death.

Speaking on Joginder Singh's familial side, Gurdayal Kaur, the wife played by Aditi Sharma, is exceptionally well done. Aditi's acting is effortless and her innocent face immediately made us connect with her character. Joginder Singh and Gurdayal Kaur's love angle is cute and convincing. Debutante Jordan Sandhu plays Joginder Singh's younger brother Bant Singh and fits well in his character. Other's worthy of a mention are Baninder Bunny, Loveleen Sasan and Nirmal Rishi, who have kept up to their reel life characters.

This film's sound designing and cinematography is applaudable. Not only does it take one into the warzone instantly but also makes one believe the in and outs of a soldier's life. The flow of emotions is exceptionally well done. This film excels on the way it connects each character to the audiences. One feels a part of every soldier's life and their loss in the film hurts the viewer. The writer has intelligently placed emotions in the film, which does not let a viewer fell overtly sad or bored. This film, though a war biopic, is a full dose of entertainment as well and is apt for all age groups to watch. This is definitely one of those few films that ought to be shown to the kids.

Negatives: At some points in the film, one could feel that some parts of the real story are deliberately brushed upon to create a connect but when one watches the climax, this feeling too, fades into thin air.

Music:  The music of this film has an occasional variety. The patriotic songs will now be heard playing  during the national holidays., while the romantic numbers are already being liked by the youth. Our favourite from the film is 'Naina'.

Direction: Simerjit Singh's direction has set a benchmark for many others who strive to make war biopics. Such films require a lot of patience and the right vision to come out the way Subedar Joginder Singh has. This man's projection for each character is praise worthy and by bringing out the best in each one of them is his excellence. His winning shot, for us, was the last scene of this film, where Gippy (Subedar Joginder Singh) is seen standing alone, blood soaked, but with courage pouring through his eyes.

Production: Hats off to the production team for managing this film's set up. Though we know that the shoot has happened in the most extreme weather conditions, but the way this film's cinematic experience has stood out, is an effort that still remains beyond limits for majority of production houses in Punjab.

Verdict: Subedar Joginder Singh is one of those few films that create history.I recommend a national holiday for the entire nation to go and see this movie. It makes the other recent high-profile acclaimed films look hopelessly inadequate.

Rating: 5/5 (Incomparable to any other Punjabi film till date!)