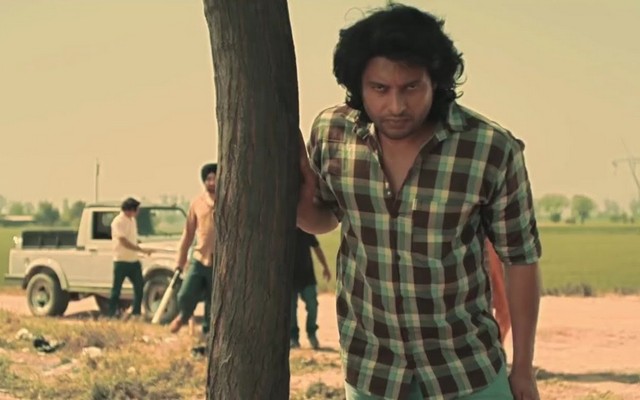 Storyline: The film is based on an acclaimed book "Dakkuan da Munda", an auto-biography of famous writer and journalist Mintu Gurusariya. A young Kabaddi player, Mintu fell for drugs way too soon which also introduced him to the world of crime. How he fought for his life and gave up drugs forever, while becoming an inspiration for many, is what this film is all about.

Aaah! I clapped when the film ended. Since the day I had seen this film's trailer, I was sure that it won't disappoint and I was happy that it lived up to my expectations.

Nope, this isn't a typical commercial Punjabi film but a level of Punjabi cinema that shakes you from within and makes you question yourself 'yaar eda diyaan filma kyon ehniya ghatt bndiya ne ethe'?

Dakuaan Da Munda, starts off on a note where Dev Kharoud is seen as a decently dressed man, who is on a mission to get the MLA behind bars for his drug connections. He is threatened for life by the gundas of MLA, while he's on the way to the court to deliver evidence. The gundas go to his house to keep an eye on his family and warn him that if he blurts out anything against the MLA then he'll lose his family forever. While shuffling through his files, the gunda finds a book written by Mintu (Dev Kharoud) which he starts reading and the entire film then goes forward as a flashback, with a narration.

Mintu, a young boy, whose father is involved in smuggling drugs from across the border, has his tryst with this ugly world way too soon. His mother (Anita Meet) is the pathetic figure of a rural Punjabi woman who has seen nothing but miseries in her life. A promising student, Mintu takes up Kabaddi which gets him many trophies. He joins a college and meets a gang of boys, who are into drugs and that is how he gets into the same habit. One thing leads to the other and soon he's seen fighting gangwars and builds political links that fund him for their personal benefits.

His love interest Rajji (Pooja Verma) enters his life when he's just a college joinee but his transition leads to their fall out and ultimately the girl chooses to get married to someone else. This romantic set up offers the audience some light moments and good songs to enjoy. Pooja has carried her part fairly well.

Slowly, all of Mintu's gangmates start moving away, either by choice or they die. He lands in jail due to his notorious actions and lands his father behind the bars too. While in jail, his father passes away while breaks Mintu down and he drowns into drugs. Is is then when his addiction grows way too much.

After serving jail sentence for nearly one and half year he goes home, only to struggle with life. His mother has not enough money to buy basics but the man takes what he gets his hands on to buy drugs froma local lady. He meets an accident and fractures his right leg and arm, which confine him to bed for many days. It is then when his addiction gets to his head and he demands that his mother buys him a drug from the village else he'll go by himself (with a bleeding leg, which the doctor said, might be lost if not taken care of). That night after a pour out of his mother's emotions, the man wakes up as a different person. His will power strengthens and ultimately he wins over drugs and survives.

He gets into reading books and lands in himself a job with a newspaper which becomes his weapon to eradicate the roots of drugs in his region.

This is where the present day story takes over and after the courtroom verdict, Mintu hurries back home only to find his son standing on the terrace saying 'Zindagi Zindabad'.

Dev Kharoud is brilliant in the film. His looks, his body type and his dialect seems to match the essence of his character in the most appealing way. My only concern was the shabby wig that he was wearing..it could have been better.

Anita Meet was fabulous as the mother and her presence in the film was a delight. One literally feels the plight of that pathetic mother, from the expert acting skills that Anita has.

The best part about the film was that no other character stole the limelight from the main guy. Each character had a part and faded away at just the right time.

A few misses though but overall a phenomenal cinematic experience.

Verdict: A must watch family film which should not be missed at any cost. Surprisingly, each character has his own set of fans that'll hoot for him everytime he comes onscreen. You'll know what I mean when you watch the film.

Finally, I'll sum up with a salute to Mintu Gurusariya's spirit to walk out of this death trap alive and inspire others to do the same.