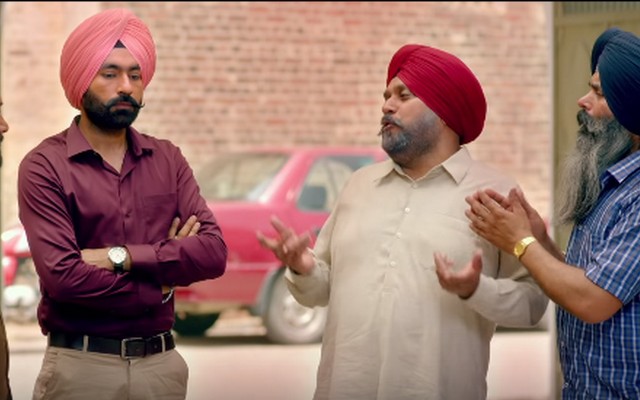 Storyline: Jaspal Singh (Tarsem Jassar) becomes Kanugo is proposed for marriage by his local relative, who introduces him to Harman (Nimrat Khaira). Love at first sight happens and what follows is what you need to watch in the film.

Review: Call it  a desperate attempt to jump into the same league as the ongoing successes or whatever, but this film is the most ridiculous attempt of this year. From a man who has delivered projects like Rabb Da Radio and Sardar Mohammad, an Afsar kind of film was just not expected. Tarsem Jassar has highly dissapointed me by choosing to do this film.

Afsar is a film about a man who gets a government job as Kanugo and gets proposed for marriage by a local relative. She introduces him to Harman, who he falls in love with at the first sight. As a suitor, he and his family go to Harman's place for a ceremonial yes but things take a turn when Harman's father refuses to get his daughter married off to a Kanugo. He prefers getting a son in law who is a patwari (a position lesser than Kanugo).

This is where Karamjit Anmol's character is introduced to the audience. With a badly placed beard, Karamjit Anmol tries hard to do what he's best at (to make audiences laugh) but this time, even he fails to provoke laughter. By the way, he eyes Harman too.

So, the story takes a turn and Jaspal plans to replace another Jaspal (Patwari) and uses his name and position to convince Harman's folks to get her married off to him, now that he's become a patwari. Harman, on the other hand, is a government school teacher. This school also has Gurpreet Ghuggi as the main staff member, who also eyes Harman.

So if this much confusion is not all, hor suno...the real patwari Jaspal has a love interest who is the sister of a god forsaken don. The don is supposedly out on payroll and rest...is simply too much for me to even mention.

Afsar, by far, has been the worst film of 2018. All the actors, including Tarsem Jassar, Nimrat Khaira, Nirmal Rishi, Karamjit Anmol, Gurpreet Ghuggi and others have been brutally misused in this film.

I was about to walk out of the theatre after merely watching 15 minutes of the presentation but my profession does not allow me to walk away from even such torturous films.

Sitting till end was a punishment and you'll know it when you watch it and if you've seen it already, you are already feeling my pain.

Nope..none of the actors impress, not even the lead.

Verdict: This Afsar has nothing but crap to offer. Totally avoidable.