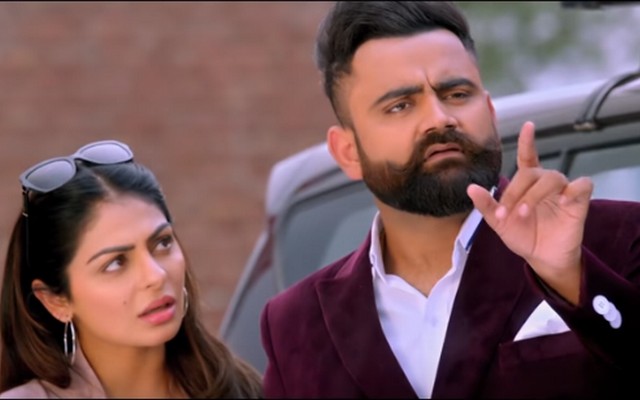 Storyline: Aate Di Chidi is based on the life of a family comprising of Vikram (Amrit Maan), Eliza (Neeru Bajwa), their son Lavi (Anmol Verma) and the grandfather Dilip Singh (sardar Sohi) who live in Canada and are not a happy family. Dilip's constant demand of going to Punjab gets accepted and the entire family ends up breaking their perceptions of a rangla Punjab after they realise that Punjab is not the same anymore. Throughout this journey a lot goes on in between which you'll see once you watch the film.

Review: There was once a film I saw which was titled 'Mera Pind My Home', a film that genuinely showed how a well educated NRI can change the destiny of his village in Punjab, by obviously incorporating his western learnings into his rural lifestyle. I am sure that the movie must have inspired many to change the face of their villages.

Now this film, Aate Di Chidi is a desperate attempt to grab the attention of those heartbroken NRIs who have either spent their life doing stressful jobs in foreign countries or have been deceived by their own children. The film starts with Dilip Singh's high headedness where a Canadian gora is seen talking to him in Punjabi (god knows why) and asking him to leave the job and also pay his dues to the company, as he had caused damage to the company. He reaches home to finally realise that his over aggressive and rude daughter in law Eliza is already upset with the sorry figure husband Vikram because none of these two have a penny in their respective accounts to pay the EMIs of their car, home or even Lavi's school fee.

Next steps in Nisha Bano as Neeru (Eliza)'s colleague, who is a bad mouthed nurse because of who's quatification and bands, her husband (Gurpreet Ghuggi) could migrate to Canada. BN Sharma emerges after 20 minutes as Ghuggi's father who has just reached Canada for his younger son's wedding but ends up slapping Ghuggi because of the misconduct by Nisha who in return calls the cops. Things happen and with a slap on the face, Nisha changes form and starts her daddyji mode.

The wedding takes place and there comes a song with Amrit Maan in desi avatar and Neeru in a maxi and it is during this song that BN Sharma helps Sardar Sohi to get his passport from Neeru's almirah. He gets caught by his grandson, who says 'Dadaji je tusi chale jaoge ta mainu aate di chidi di kahani kaun sunau'. (aaargh)

Blah blah happens and they finally reach Punjab or their first tryst with Punjabi virsa in the form of two druggies on the road who fool them and take quite a sum from them. On reaching the haveli, they realise that a shoot is taking place there which is organised by their servant (Karamjit Anmol) and the song pops in with Rubina and Ammy shaking a leg.

Baaki agge niri bakwaas aa and ultimately the family ends up in Canada and preaches in the end ke je har koi apna pind svaar lve then things will be better.

Seeing the kind of performances that have been delivered by each actor, I must say that the director was either not in control or the shoot was not seriously done. All the actors were overdoing their bit. The most annoying parts were by Sardar Sohi, BN Sharma and Nisha Bano. Their characters were too weirdly written.

Lead pair Amrit Maan and Neeru Bajwa could weave no magic, rather the couple just didn't have a chemistry. Amrit Maan was shown as a displeasingly shallow husband and Neeru was shown as an extra infuriated wife who shouts for no reason. Their son, who is born and brought up in Canada simply has no Canadian accept besides the fact that the mother has a very strong accent and even insists that her child speaks English and not Punjabi but from the boy one shockingly hears words like 'Tusi ethe dokke len ae si'!

On the other hand, Karamjit Anmol and Preeto Sawhney portray Bihari characters but yet another weak point for Karamjit's character is his Bhojpuri and Punjabi transition. A Bihari just cannot speak such fluent Punjabi no matter whatever.

The most negative thing about this film is that it has shown Punjab in a very negative light. Where today, this state has been making many proud of their heritage, here is a film that is putting us all to shame and that also too flambouyantly.

Aate Di Chidi is a pure clutter where the director's vision has gone for a toss and so have the actors. The screenplay was a complete mumble jumble and the background score was all about comedy music forcefully put just to make the scene feel funny. also, most of the time one can hear the 'Daddy Mummy Hai Nahi Ghar Pe' tune playing in the background.

Verdict: The title Aate Di Chidi simply has no relevance with the film and from what I can say, this is by far the most unwatchable film of 2018.