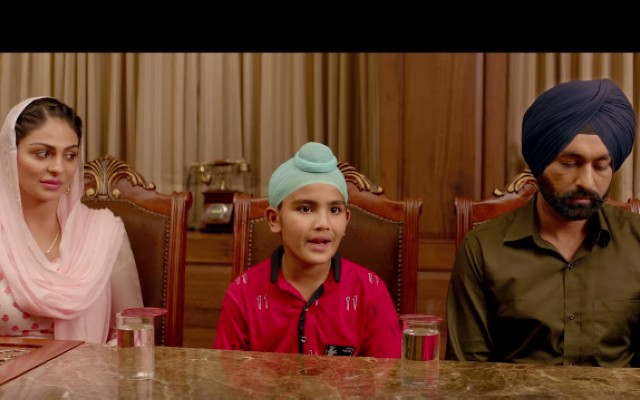 Synopsis: Uda Aida, the film is about a woman's fascination towards getting her son admitted in an English school so as to give him a bright future but primarily her motive is to get him to speak fluent English. Once this comes true, there are other things that take shape and ultimately the boy is asked to leave the school for the best of all. The end is what you should watch to know what really happened.

Review: The synopsis written above is the storyline with which the film must have been started but what it ultimately became is more of a confusion. Basically, the film is a bundle where everything has been stacked together mindlessly and tied for the sake of it. The film starts on a dreamy note showing Tarsem and Neeru's romantic alliance and then their parenthood but the dream bubble bursts a bit too soon. The moment you feel ke shayad picture vdhiya hougi, there..at that very moment, it hits your face like a tight slap and makes you realise that hey, you're judging too soon.

Neeru's introduction as a mother of a 10-year-old makes you cringe cs there's something on her face now that makes it look too plastic (no offense please). Be it her eyes or lips, there's something that you just can't help but notice and you wonder what must have happened to her face. Anyways, she's shown to be a super obsessed mother who yearns to get her son to speak English but surprisingly it all comes to her after her son turns 10! Where was this obsession when he had started speaking Punjabi in the first place and why did she even get him into a pind da school if she was so crazy about the English language?? Also the character is shown to be a typical pendu mother but her accent just doesn't work for her character. She should have been dubbed by a desi artist for this particular character.

Next comes the characters who are woven in this story. Gurpreet Ghuggi plays Tarsem Jassar's fouji taaya who keeps talking in a Hindi-Punjabi mix but suddenly the actor loses his character and starts off in shudh desi Punjabi. Weak..very weak!

BN Sharma plays Tarsem's father who does nothing much but sits at home and agrees to his daughter in law's unjust demands. To fulfill one such demand, the man even goes to the height of duping people into going abroad.

Karamjit Anmol plays a security guard in the film and his character is so not new. He is repetitive in the film and with the man's performances since the last 3 years, we must admit that this role was a disgrace for an actor like him.

Poppy Jabbal plays the school coordinator and she does a decent job. Atleast the girl fits well in her role and has performed it well too. Her scene where she talks to a village crowd in English beside the fact that she could speak in Hindi, was totally annoying. I mean cummon man!

Tarsem Jassar is the only one who was convincing as the character he was given. He skinned his character well and was a treat to watch. The man has even improved on his expressions and dialogue delivery.

Storyline: Uda Aida is a complete mess when it comes to its storyline. The first half of the film is all about learning English and getting into an English school and the second half is a puzzle. Probably the team lost their focus when they were filming the second half because the relation to each aspect has been so insensitively treated. None of the scenes in the film evoke an emotion. One doesn't even feel any connection with the characters onscreen. At one point one feels agitated over the fact that the film is shifting its focus from one subject to the other without really solving the puzzle left behind.

Direction: The direction of the film was ok but still the screenplay has been a major miss. Each aspect shown in the film is incomplete. As a matter of fact, nothing seems to be so important in the film that it had to be projected to the audiences as cinema. Frankly, it was more of a school ad than a film.

Actors: All have overacted and those who were introduced at one point or the other vanished into thin air without saying goodbye!

Music - Only the introductory song was good, nothing else really caught the attention.