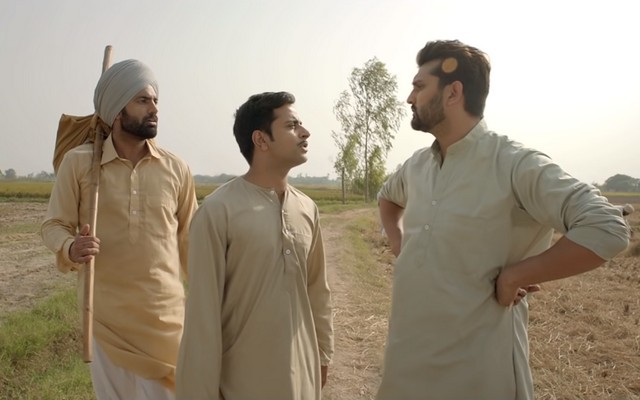 Synopsis: Unlike what has been projected, Yaara Ve is a film about 3 friends and their romantic lives. Their love stories make them indulge in some unexpected acts which lead to further problems. Amidst the normalcy suddenly the news about partition breaks and many families including these friends, leave for India. What happens in the end is for you to watch in the theatre.

Review: Yaara Ve is a predictably unpredictable film! When I stepped into the theatre, I wasn't really expecting much but when I walked out, there was a happy smile on my face. The reason, I had watched something unique this time and I was glad.

Talking about the storyline, Yaara Ve showcases a mesh of friendship and love. Buta (Gagan Kokri) and Neza (Yuvraj Hans) fall in love with Naseebo (Monica Gill) and Nooran (Hashneen), respectively. To get married, both these men indulge in some notorious situations which are not only unexpected but even giggle provoking. Though one feels that the story is predictable but the writing is such that it surprises at many points throughout the film.

Actor Gagan Kokri was a treat to watch as his Laatu performance wasn't very promising. As Buta, the man was believable with the innocence in his dialogue delivery and expressions. His wrestler self was funny but I did feel good when he won the challenge. He suited his character and now I am sure that the man is going a long way.

Yuvraj Hans was seen in a similar role in Lahoriye and this time yet again, the actor has proved his mettle. His character Neza has been adsorbed well by Yuvraj and his naughty side made me adore him even more.

The actor who stood out for me in this film was Raghveer Boli. This little bundle of talent blasted me with his performance and comic timing. The man was unbelievably good as Kishan and most of the film's burden was handled by his character. While Buta and Neza are engrossed in their respective love stories, Kishan comes forward as the troubleshooter, doing all that it takes to get his friends what they desire, be it a cycle, a meeting with their ladies or whatever. The best part of his character was his transition to Bachno massi. Mindblowing!

Monica Gill has delivered one of her finest performances till date as Naseebo and her dialogue delivery was pretty much tamed, though the accent did leak out at some places. But overall, she did a good job.

Actors Yograj Singh and BN Sharma both have gone a little overboard this time.

Actor Pali Sandhu was a great performer as Bhagtu. His high headedness and mischievous side were convincing yet I sympathized with him at times for being carried away. A good find, Pali Sandhu is an actor I'd want to watch in more films.

The scenes that will stay with me in this film are first, the khujli wali booti, second, the bachno maasi scene and third, the cycle on the tree after 50 years.

Direction: It wouldn't be wrong to say that Rakesh Mehta is the director of Cinema lovers. The man makes films that delight those movie buffs who are done with seeing silly mistakes in films that make big promises but end up being blatant. He did assure us of a good film but Yaara Ve emerged as an unexpectedly decent product which was a pleasant watch. A pat on the back for bringing out the best in his actors.

Music: The film has some good songs which are for easy listening.

Verdict: Yaara Ve is a good product that will win over you especially because of it's unexpected twists and funny situations. A family watch, this one is a pleasant film which will make you walk out with a smile on your face.