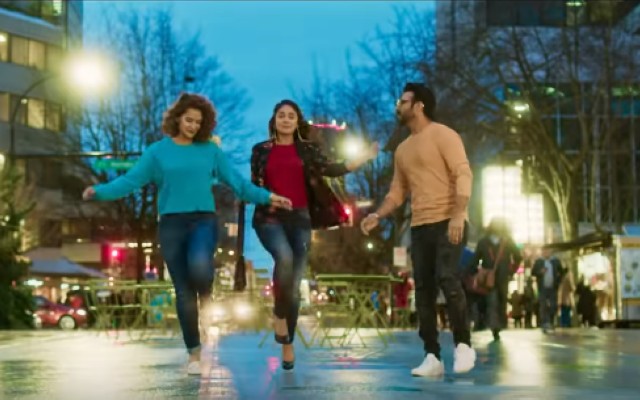 Synopsis: Laiye Je Yaarian is basically a story of a girl name Raunak who lives in Canada with her mother and her father passed away leaving behind a transport company for her. This company was a partnership firm jointly owned by Raunak's father and his friend who, after his death, ditches the mother-daughter duo and takes a heavy chunk of 85% from the company, leaving behind a mere 15% for the widow and his daughter Raunak. Raunak's transport company, Raunak Transport, is sinking by each passing day and nothing seems to be working for her, besides all her efforts. So she decides to hire a manager from India to work things out for her strategically.

Also an RJ, Raunak finally invites a college pass out Sukh from Punjab who fakes being a topper and even has a degree made to prove his lie. The man reaches Canada and immediately tries to flee from the airport to go and live with his friend Laadi who shows himself as a well-settled Canadian. But Sukh gets recognized at the airport by Raunak who then takes him home with her to finally offer him to live in her extended home. Sukh tries to flee again but soon finds out that his friend was not at the given address and it was all nothing but a sham. He returns to Raunak's home and starts his job as the manager of Raunak Transport.

On the other hand, the 85% shareholder friend of Raunak's father has a son named Garry Randhawa who owns Sardool Transport. Shown as a flamboyant casanova, he is majorly seen announcing company-sponsored events and spending time with friends and celebs. Both Raunak and Garry are shown to be anti to each other throughout the film. Amidst this journey, we are also introduced to another character named Jaanu, who happens to know Sukh from his college days, and is a banker. Sukh and Raunak plan to take her help in getting a loan for Raunak Transport but during this attempt, Sukh and Jaanu get too close, which starts bothering Raunak.

Now if you're expecting this to be a love triangle then let us tell you that one more word from the story will open it up entirely and we don't want to spoil your fun so go ahead and see it in the theatre to know what happens next.

Review: From the trailer of Laiye Je Yaarian we had expected the film to show us something totally unique which we haven't seen in a while and well, we're happy to say that it did. The problem was that the way the screenplay has been written makes this film exaggerated and boring to some extent, only to finally brighten up towards the last 20 minutes. Till the interval, there is overuse of Raunak Transport and Sardool Transport and one feels ke yaar eh story move ta kr ni rhi...khichi hoi aa zabardasti. With a thud comes the interval and again post that you want some adrenaline rush but nothing works till finally a sudden twist changes things and it feels like someones told the director ke bus hun story mukao film khtm krni hai.

Actors like Gurshabad, Sajjan Adeeb, and more have been given some worthless bits which don't do justice to their creativity and Amberdeep himself has done a character which presumably had to make the audiences giggle but it failed.

Talking about the actors, Laiye Je Yaarian has been projected as an Amrinder Gill film but you'll be disappointed to know that the man isn't the main lead in this film but has a special appearance. In the little that he's been given, one sees the actor trying to use a takia kalaam to justify the twist in the end but it all seems too made up. From his first look of Garry Randhawa, we had expected much more from the actor but we were left craving for more.

Roopi Gill is the lead actor of the film who plays Raunak. The story is basically knitted around her character. Her curly hair look and stubborn attitude have worked well for her but she does need to work on her dialogue delivery as she tends to chew her words while speaking fast. At some points, we could see her make up too prominently done and the curls went for a toss too. These are small details that must be taken care of. Overall, she impresses and we look forward to seeing more of her onscreen.

Harish Verma plays the fake topper who in turn proves to be an asset for the sinking company. He has performed his bit well and is believable but at times, his face looks tired and dark because of bad lighting.

Rubina Bajwa looks beautiful in the film and we're glad that she's finally doing roles that suit her best. She must stick to this segment because rural characters are not meant for her. Her bit as Jaanu was a pleasure to watch.

Kamaljit Neeru has marked her acting debut with this film and we were totally bowled over by her perfection as an actor. It was a treat to watch this veteran who looked like a perfect fit for this role. With open arms, we welcome her into the world of Punjabi Cinema.

Director Sukh Sanghera marked his film debut with Laiye Je Yaarian and we're happy to see that he was atleast better than the recent debut director Parmish Verma. Though Sukh Sanghera needs to still focus a lot more on the film's connect and flow, we feel that he will improve in his next projects. All that we can suggest is that he needs to be in control of the screenplay and story because both these factors mean a lot when it comes to the final output of a director's vision of a film.

Music: The music of this film was average and we loved the song 'Ah Ki Hoya'.

Verdict: Laiye Je Yaarian is not the best film to watch if you're expecting a heavy dose of Amrinder Gill but you can go ahead and see it over the weekend to witness a story that is unique.