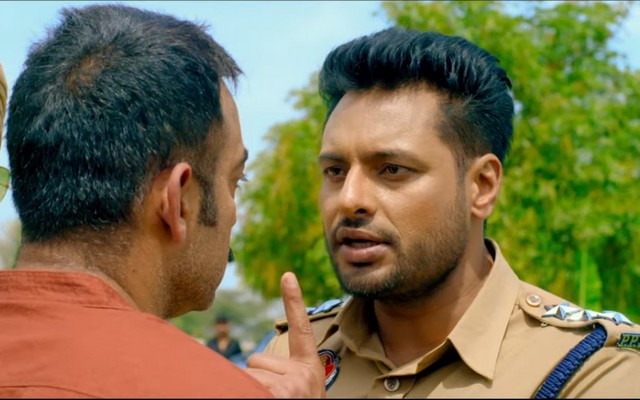 Synopsis: DSP Dev is the story of a corrupt officer who goes through a series of events to finally realize that he's not meant to be what he's become. Finally, his fight with the political gangsters and his ultimate win is what this film is all about.

Review: When we watched the trailer of this film, we were sure that the film will contain all the commercial elements for a cop movie and we were right. The film opens with a few weak shots but over the next few minutes builds up to win over till the last moment. The story, based in a village called Daulatpur, shows a drug mafia ruling fearlessly in Ferozepur district and has his feet strong due to his political umbrella and deep-rooted network. The first few minutes of the film show that the cops who dare to take a stand against this drug mafia face a merciful death.

As the MP elections approach, the political leader demands an officer from his network of people and that's when one of his police officer nephew suggests the name of his friend Dev who he calls an extremely corrupt person. The son of a highly fair and honorable DSP, Dev gets his father's job after his sudden death. After a recommendation, he gets transferred to Ferozepur and then the story takes another turn. He confronts Rana Brar, the leader of the drug business, and they instantly become friends. How this friendship finally turns a corrupt cop into a good cop, is what this film is all about. Although it may seem to be a story that has elements which you must have seen before but trust me, there are instances in the film that totally bowl one over.

Dev Kharoud's performance as a dhamakedaar police wala is winsome and thankfully this time, there was no shade of any Bollywood actor in him, nor Salman's Dabangg style not Ajay Devgn's Singham look nor Ranveer's Simba shade. This character was all in all Dev Kharoud himself and we loved it! Throughout the film, at many points, I personally hooted, clapped and laughed loud saying 'yeah baby' because of the excitement it created inside me. Glad to see his funny side in this film too. He carried it well. His dialogue delivery was strong, his romantic side was cute, his action avatar was fearless and his overall persona was appealing. One of Dev's finest works.

Mehreen Pirzada had not much to do in the film but as much as she had, she was convincingly good. Her Punjabi speaking skills were great and she looked naturally beautiful onscreen. One of her dresses though made me cringe, it was the club song skirt which made her look too bulky. Overall, I'd bee looking to see more of her onscreen in Punjabi films.

Manaj Vij is a pleasure to watch as the antagonist. Starting from his opening scene until the end, each frame brings out the best in this actor. His eyes have always been his biggest asset and this time yet again his red eyes, drugged drugs, angry eyes, and laughing eyes speak for his character. Though we'd want him to be the good guy in the film circle but we wouldn't mind seeing him as a baddie if this is how he'll perform each time!

Other characters like Hashneen Kaur and Deep Sehgal ought to work on their expressions and emotions for their onscreen characters and the pretty cop Milanpreet Kaur didn't have much to do.

Shivendar Mahal plays a strong and honest officer who wants his son to follow the law-abiding path for a respectable life. He does his bit fairly well and his wife, played by Nita Mohindra, is also very much an officer's wife who knows her husband's mindset well enough.

I'd like to specially mention the character played by Lakha Lehri which is so close to reality that it stays with you. This character has been written beautifully and speaks for itself. The actor has played his part extremely well. His role shows that experience teaches you to patiently wait for others who are doing the same mistakes as you, to finally learn their lessons in life.

Director Mandeep Benipal's vision to create a unique product out of this commercial cop film is worth an applause. How he joins different subplots and makes a winning product is something not everyone is capable of doing. In the era when Bollywood, South Industry and even Punjabi industry has explored the cop genre way too much, this man brings forth this film and shows that even a well-rehearsed formula can be presented in the most unique form if the vision of the director is clear enough. Pat on the back for you Mandeep!

Music: The music of this film is average and is a mix of different genres.

The background score in one part of the film's fight (Post the security van theft) sequence was not up to the mark and this made the scene a little less energetic as it was supposed to be.

Verdict: DSP Dev is a full paisa vasool entertainer that has all the elements to keep you glued to the screen till the last moment. Go watch it in the theatres near you and do take your kids along, its a family film.